What are Non-Communicable Diseases and why are they an urban problem?

Tackling the Root causes Upstream of Unhealthy Urban Development (TRUUD) is a UK research programme that aims to prevent non-communicable diseases (NCDs) and health inequalities linked to poor urban environments, in the future. This blog explores what NCDs are and some examples of why they are an urban problem.

What are Non Communicable diseases (NCDs)?

We are all affected by NCDs. It could be a friend, a member of our family or even ourselves who contract one or more NCDs in our lifetime. NCDs include diseases like cancers, type 2 diabetes, infections of the heart, kidney, and lungs, and the growing mental health crisis. These non-infectious diseases are responsible for nearly nine in ten of all deaths (89%) in the UK1 NCDs can also increase the risk of contracting communicable diseases, such as pneumonia or COVID-19.

Why are NCDs an urban problem?

Low quality urban and built environments increase the risk of chronic ill health, poor mental health and death, causing a huge burden to society. With four in five people in the UK living in towns or cities2, there are many ways urban living can affect our lifestyles and increase the risk of NCDs. The following list illustrates some examples where there is clear data about the relationship between urban environmental quality and NCDs, such as:

People living in more deprived urban areas are especially vulnerable to NCDs through exposure to poorly designed and more polluted urban environments. Such health inequalities3 have increased in England since 20104. The average life expectancy for women in the most deprived areas in England is 8.7 years less than women living in the least deprived areas (79.7 and 86.4 years respectively). The average life expectancy for men in the most deprived areas is 9.4 years less than men in less deprived areas (74.1 and 83.5 years respectively)5. People from Pakistani, Bangladeshi, and Black African backgrounds are more likely to live in an urban location6, and different ethnic groups  experience different levels of NCDs. For example older black and minority ethnic people report poorer health outcomes than older white people, even after controlling for social and economic disadvantages7,8. 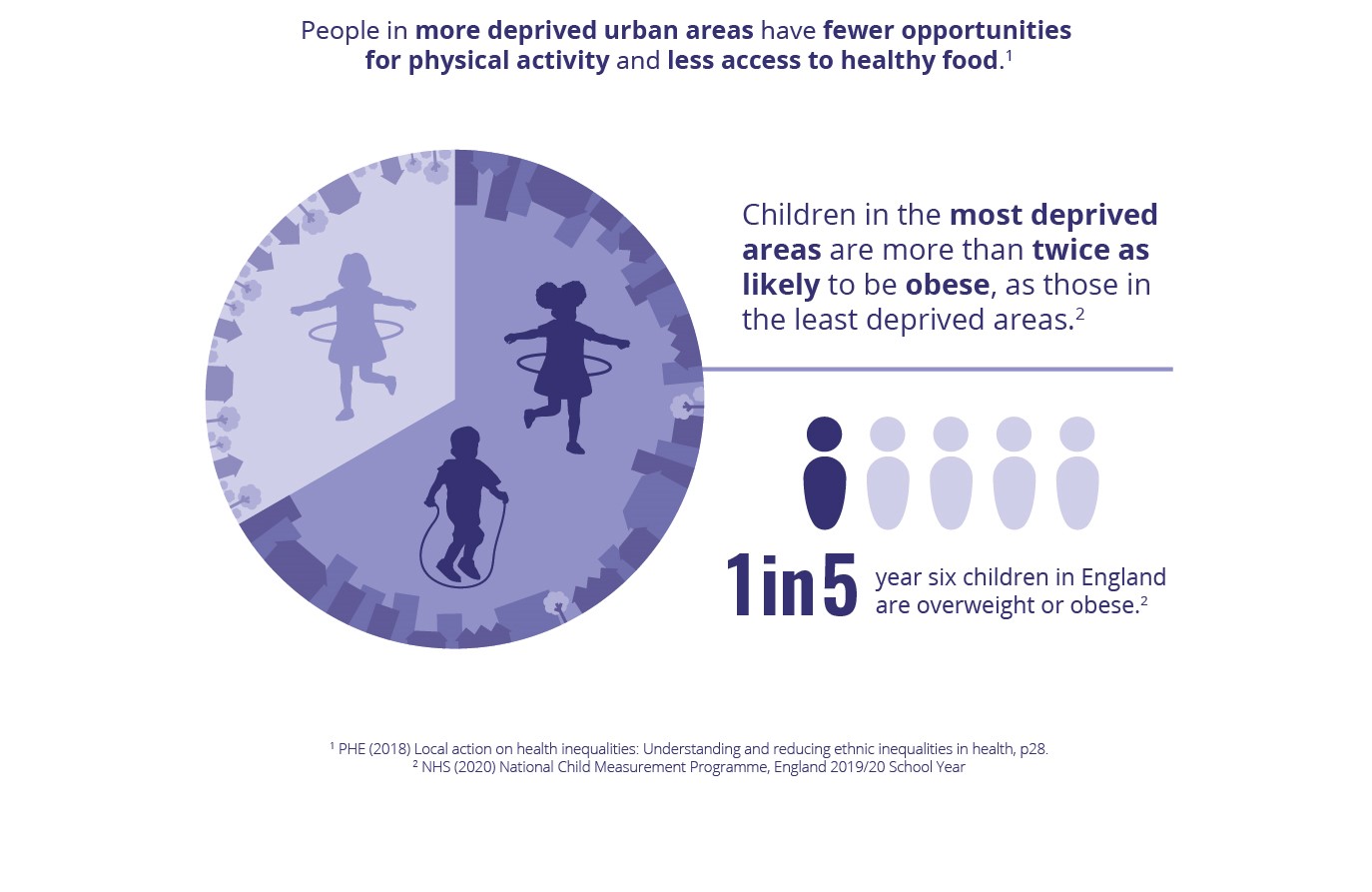 It’s estimated that the NHS could save over £2 billion a year in treatment costs if everyone in England had more equal access to green spaces13. Research has shown that access to good quality green spaces can encourage exercise, time moving around and promote good mental health14. Two out of three people lack access to even half a hectare (equivalent to less than a football pitch) of amenity green space within 200m of their home, and people on lower incomes are less likely to have access to green space15. The quality of green spaces is likely to be worse in areas with a higher population of black and minority ethnic residents16. 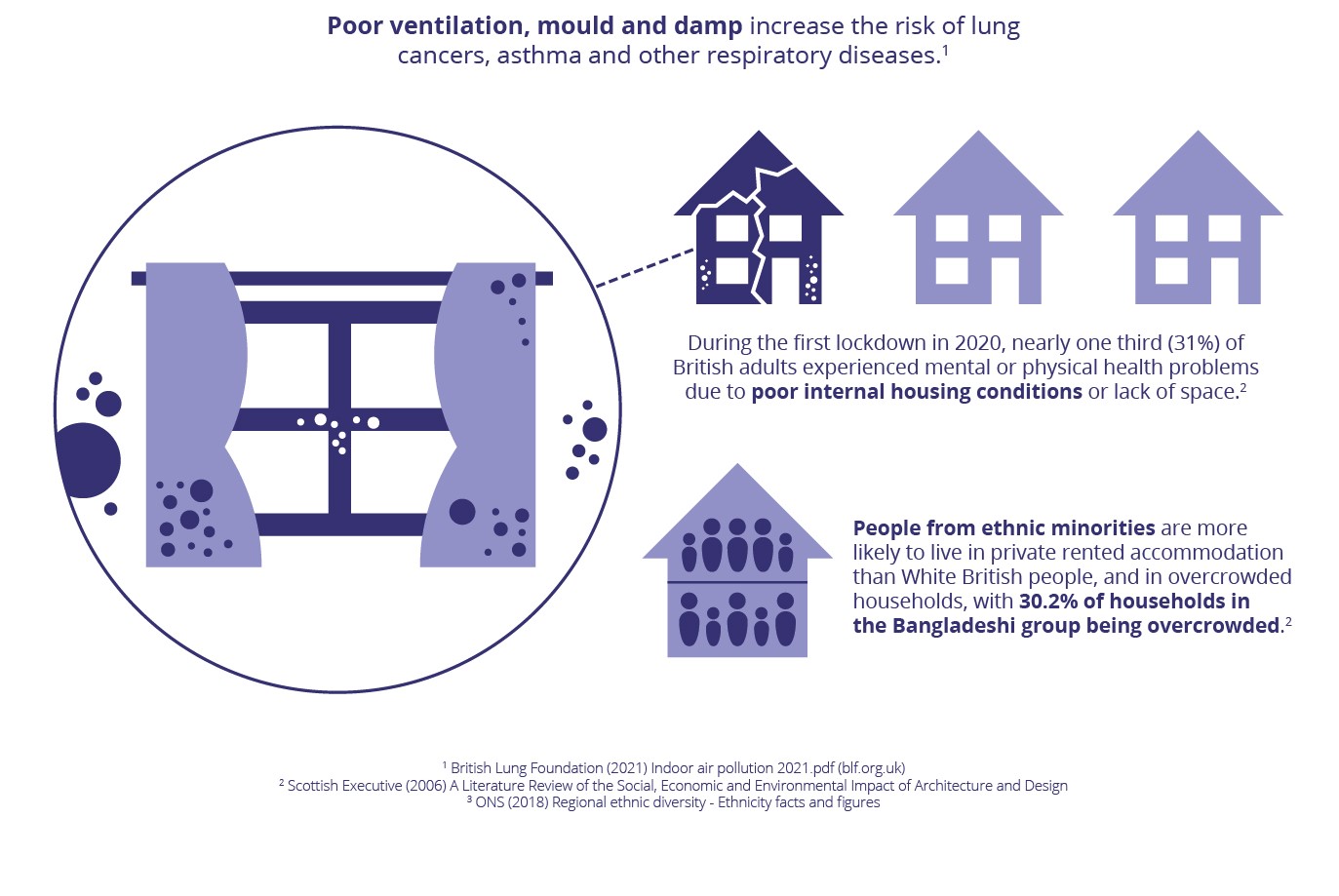 During the first lockdown in 2020, nearly a third of British adults – 15.9m people – experienced mental or physical health problems due to poor-quality indoor environments17. In 2017, one in every 25 homes (4%) in England was found to have damp, 2% had problems with condensation and mould, and 7% of residents reported their homes as uncomfortably hot18. Problems like mould and damp increase the risk of lung cancer, asthma and other respiratory diseases19. Poor heating, ventilation and insulation also have been linked to cardiovascular and mental health problems20. Conversely, provision of sufficient internal space and access to natural light have been associated with improved physical and mental wellbeing21. Evidence suggests poor indoor air quality costs companies £250 per person every year in terms of lost productivity from headaches and ill health22.

Lack of access to decent, secure and affordable housing exacerbates poor health. Over a quarter (28%) of people living in ‘non-decent’ private rental homes rated their health as ‘less than good’, compared with 22% living in decent rented homes (homes as assessed by Ministry of Housing Communities and Local Government)23. In the winter of 2018, 17,000 people died due to poorly insulated homes that they couldn’t afford to heat24. Overcrowding affects an estimated 829,000 households (3.5%) in England impacting both physical and mental health, and overcrowding is more common in ethnic minority households compared to White British households (2019-2020)25. 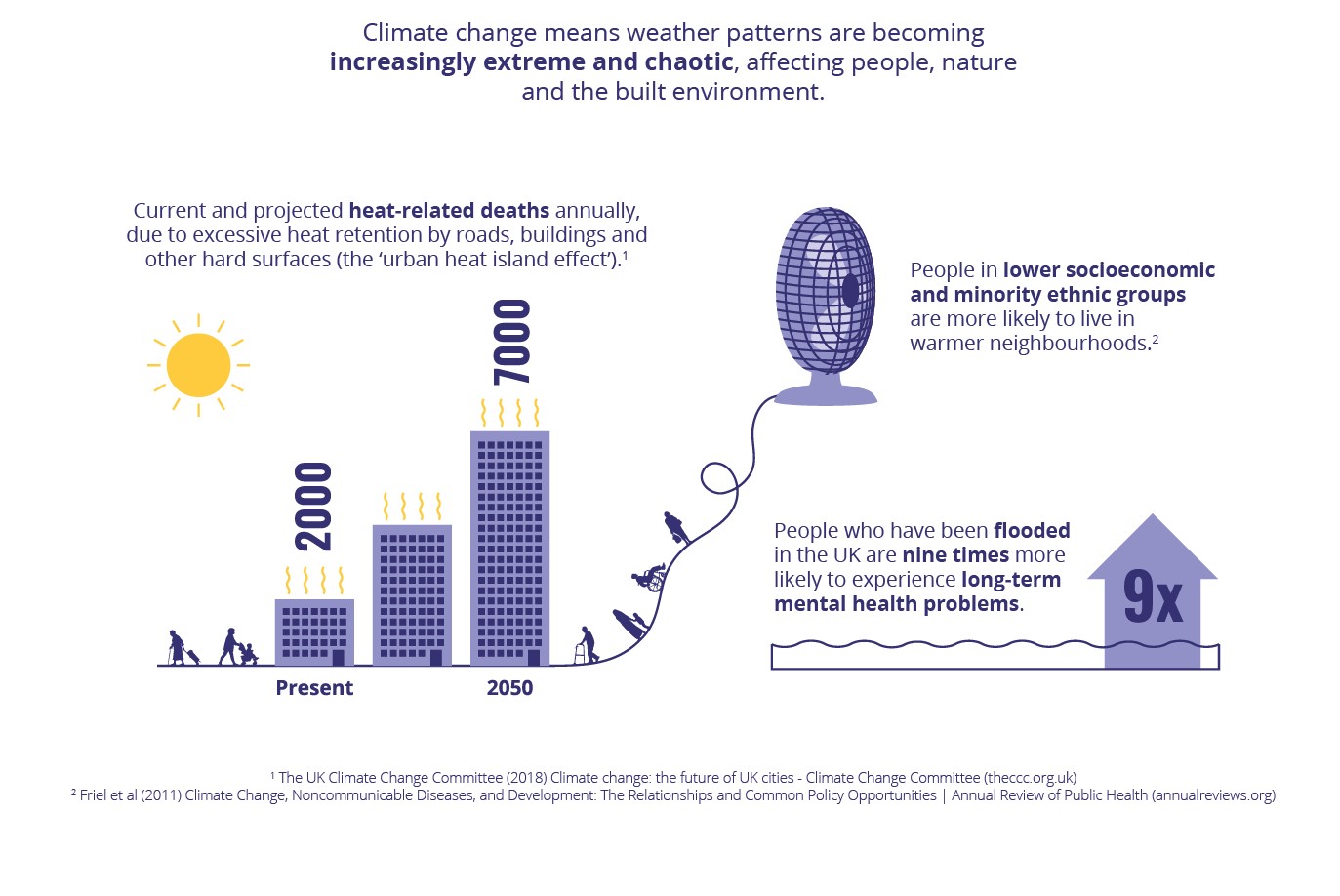 Our urban environments are not always well equipped to deal with the challenges associated with climate change and NCDs. Urban areas face growing flood risk. People who have been flooded in the UK are nine times more likely to experience long-term mental health problems than the general population. Over 80,000 properties in the UK have flooded since 2007. 25 In a single year (2019 to 2020) UK floods were estimated to have cost the economy £78 million26.

Predicted 4 -5°C temperature rises are also leading to urban overheating. Around 2,000 heat-related deaths already occur each year in the UK, and this is projected to increase to 7,000 by 205027. People living in deprived areas are more likely to live in warmer neighbourhoods without sufficient resources to cope. These communities are disproportionately affected by NCDs28. 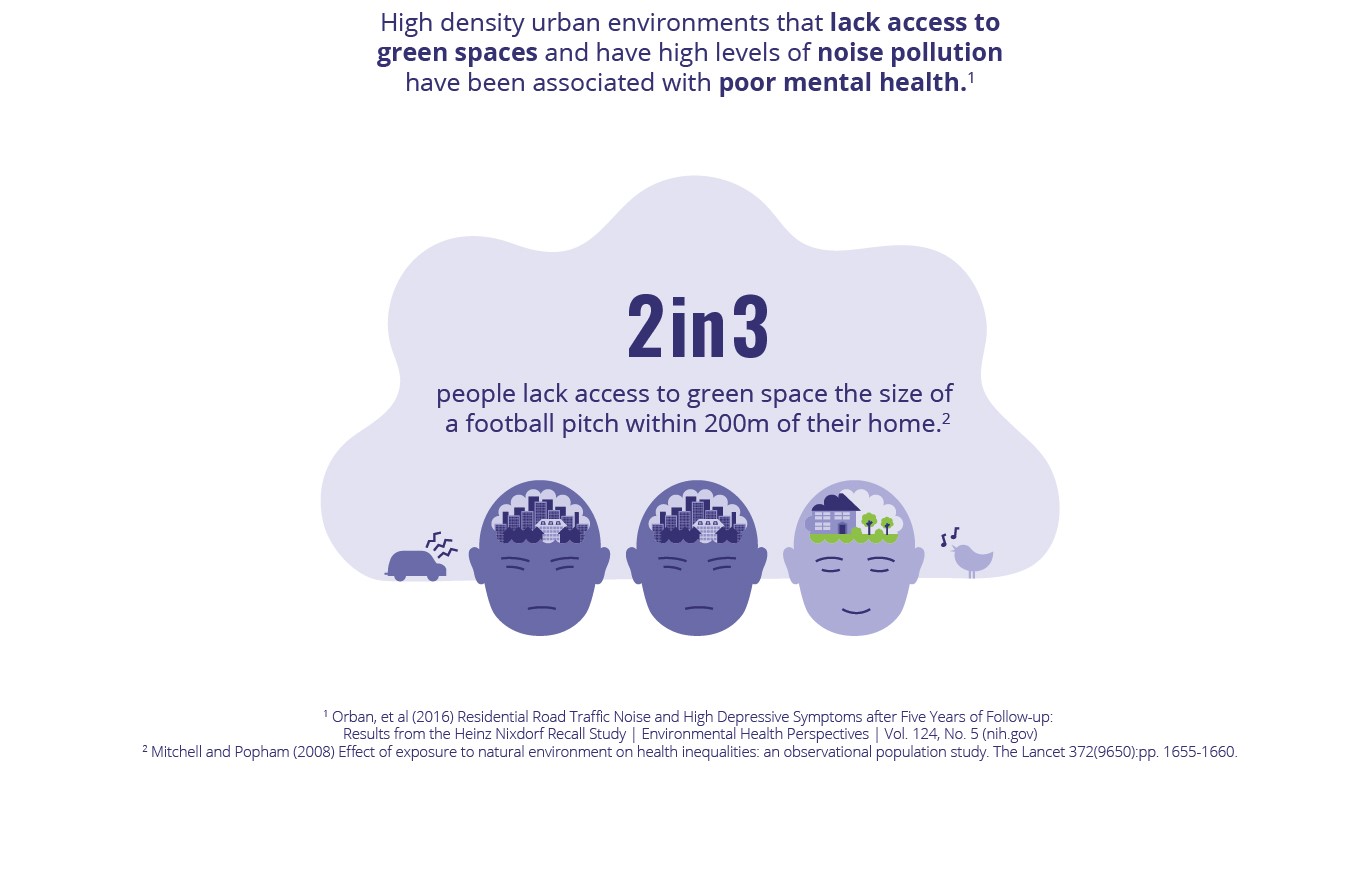 One in six adults has experienced a common mental health disorder, such as anxiety. Around 551,000 people in England experience severe mental illness (SMI) such as schizophrenia or bipolar disorder29. Crowded urban environments with high levels of noise pollution have been linked with poor mental health. One German study found people living in areas with high levels of traffic noise were 25% more likely to develop depression than those living in quieter areas30. Another study found child conduct disorders and hyperactivity increased with higher levels of traffic-related noise31. 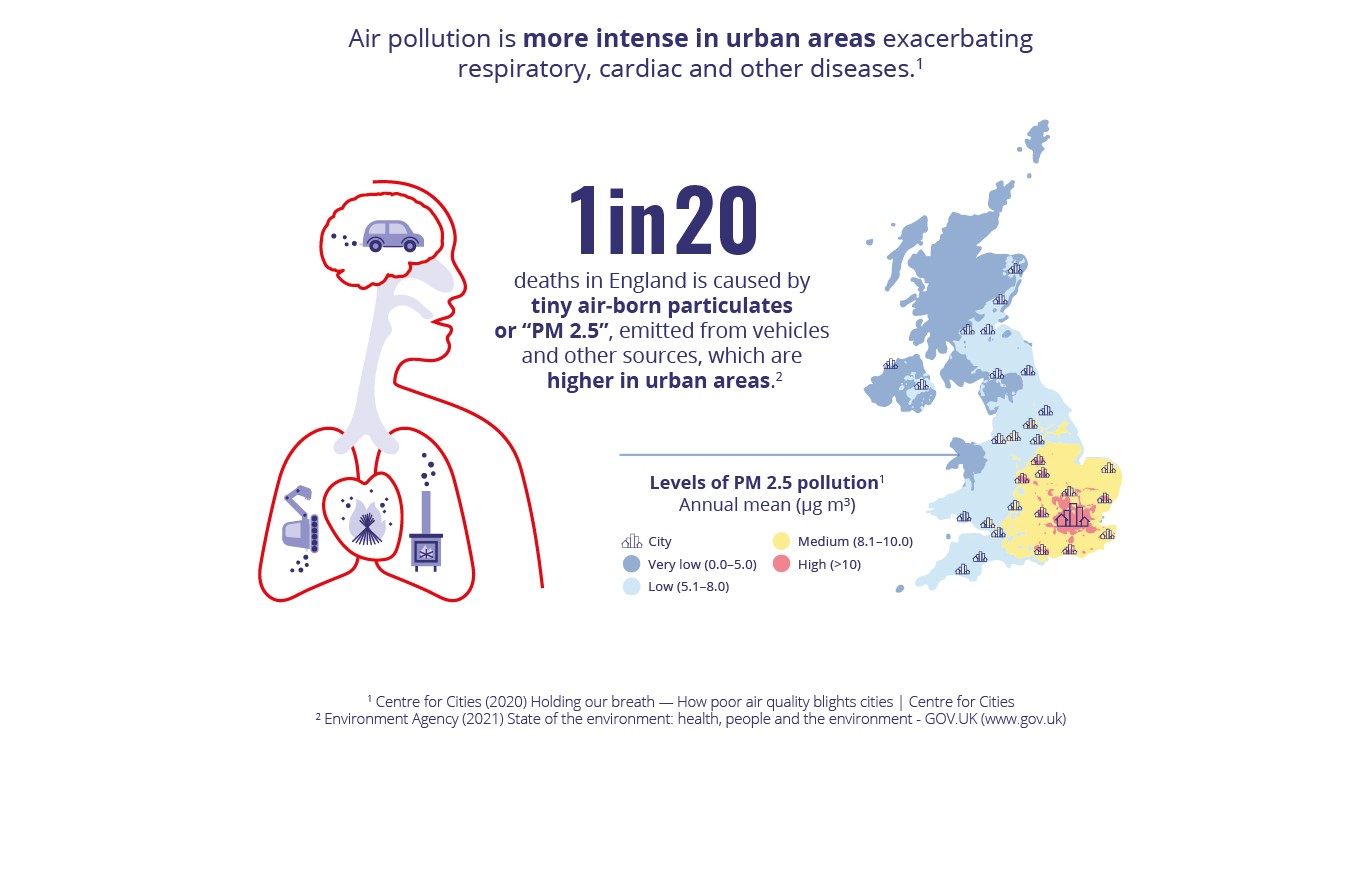 The threat of air pollution is more intense in urban areas with more emissions from buildings, industrial processes and vehicles32. As the tragic death of Ella Adoo-Kissi-Debrah highlights, exposure to urban air pollutants can aggravate diseases like asthma, lung cancer and other respiratory diseases33. People from black and ethnic groups are more likely to live in or near areas of higher air pollution in England34.

One in every 20 deaths in England (5%) is caused by small particulate matter (PM2.5).35 These tiny particles are invisible to the naked eye and around half are emitted from human activities such as wood burning, and tyre and brake wear from vehicles36. Outdoor air pollution from particulates and nitrous oxides cost £22.6 billion in health care provision every year. Poor health, linked to air pollution, can lead to time off work, affect children’s learning and reduce employment options in adult life.37

The shocking thing is that NCDs are often avoidable – our diets, the way we travel and levels of activity, and the quality of the environment around us can significantly affect our risk of contracting NCDs. There are numerous factors, we can’t control directly, which can make it harder for us to live healthier lives, and more vulnerable to NCDs. These relate to the decisions that the government, local authorities, and companies take every day, which affect the quality of places we live in. The question is, what is preventing policy makers and corporate leaders from helping to create more healthy urban environments?

Tackling the Root causes Upstream of Unhealthy Urban Development (TRUUD) is a UK research programme that aims to map out the different urban systems, to look at these complex and interconnected drivers that are ‘upstream’ of urban health outcomes. We aim to identify how best to prevent NCDs and health inequalities in an urban context, and promote better health outcomes in the future. In our ‘Why TRUUD and why now?’ blog we start to unpack these underlying factors and outline how TRUUD plans to address them.

How can you help?

3 Defined by the NHS as “unfair and avoidable differences in health across the population and between difference groups in society” https://www.england.nhs.uk/ltphimenu/definitions-for-health-inequalities

21 Scottish Executive (2006) A Literature Review of the Social, Economic and Environmental Impact of Architecture and Design

35 ONS (2020) Does exposure to air pollution increase the risk of dying from the coronavirus (COVID-19)? – Office for National Statistics (ons.gov.uk)

A turning point in leveraging the power of planning to deliver healthy urban environments?
Follow us on Twitter

We aim to reduce non-communicable diseases by changing how urban development decisions are made, to prevent known risk factors linked to health (UKPRP-funded).

https://journals.sagepub.com/doi/10.1177/16094069221144594 Our new article free to access in @IJQMonline looks at doing qualitative research in a large interdisciplinary team. With @AnnaLeGouais & @ResearchTruud colleagues

This week our @ResearchTruud Director @db_associates took part in a panel discussion at the #GACDmeeting , focusing on how to improve health equity in urban environments.

Speakers @ghazala_mir, Daniel Black and Adam Chapman had a fascinating panel discussion on how researchers, communities, and policymakers can collaborate across sectors and disciplines to improve health equity in urban environments. 🏙️ #GACDmeeting